Pre-season orchestra rehearsals recommence at the Met this Tuesday, September 5th. I’m thrilled to have 4 brand new colleagues joining the orchestra this season, and thinking about their journey takes me back to September 2013 when I was just starting myself….

Man, what a whirlwind. What’s it like starting at the Met? In many ways, the “starting” part happens long before that first rehearsal. To begin with, you have to find a place to live, and then actually move to New York City. Both are non-trivial tasks which, especially for a timpanist, can include myriad other logistical challenges. Then, once you’ve moved into a smaller-than-imagined apartment and you’re proceeding with the familiar ritual of navigating through stacked-box towers, you start contending with strong dual impulses:

#1: “Ohmygod, I live in New York City! I want to go explore everything in this city!” and,

#2: “Ohmygod, I’m starting at the Met! I have so much repertoire to learn!”

The repertoire. All the repertoire. Copious, huge, massive amounts of new rep, all to be learned and mastered quickly. It pretty much feels like this:

For me, the second impulse ultimately held more sway, and I’m glad it did. I was motivated to buckle down early owing to several different realities. First of all, I had 15 brand new operas to learn…from scratch. This by itself is already a pretty crazy situation, because most people who win jobs with the MET Orchestra have actually played very little opera before. Most jobs out there — full time and freelancing — revolve around symphonic music. Opera is, by definition, a much more complicated and costly endeavor. There are far fewer opera companies than symphonic orchestras, and thus far fewer opportunities to learn and perform opera…especially for younger players. And so naturally, we train on symphonic music. That’s what we study in school and that’s the basis for our core excerpt repertoire. So new MET Orchestra members generally won’t “know the rep.”

Then there’s the reality that operas are long, and can contain anywhere from two to five times the amount of musical material that is in a standard symphony. (For example, an evening of Wagner’s Parsifal commences at 6:00 pm and concludes at 11:57 pm, nearly 6 hours later!) So learning 15 brand new operas would be like learning roughly 50 brand new symphonic works. Imagine that for a moment: that’s all 9 Beethoven symphonies, all 9 Mahler, 4 Brahms, 4 Schumann, 7 Sibelius, and 15 Shostakovich…plus a few from Tchaikovsky, Dvorak, Mozart, Schubert and Prokofiev to round it out. So yeah: just learn all of that, from scratch, just for season 1. DAMN. That is a monumental task. Because while most people who win jobs in symphonic orchestras will have played a good chunk of those symphonies listed above, it will be the first time for most new MET Orchestra members. That automatically imposes a steep and aggressive learning curve.

And first times also tend to carry an extra psychological burden. Ironically, it is our core opera repertoire that gets the least rehearsing. Classics like Aida, Bohème, or Carmen will be lucky to get 2-3 rehearsals before opening night. Statistically, this is a reasonable scheduling plan, because most people will have played them. But for the new folks, the burden is much greater: 0 to 60 mph with precious little rehearsal time.

Finally, there’s the reality of the constant threat of epic public humiliation. I previously wrote that operatic timpani are agents of peak drama; well, the corollary to that is that timpani are also the agents of peak catastrophe. More than almost any other instrument, we timpanists have the capacity to derail the entire performance. That is a weighty responsibility that no timpanist can take lightly, especially at the Met!

Thusly motivated, I set myself to the task of “faking it well” — preparing so thoroughly that, even though it was obviously my first time, it would hopefully sound like I’d played the repertoire 100 times.

But there was one other major factor to consider that my new colleagues had warned me about: fatigue. The MET Orchestra schedule is absolutely grueling. We are frequently called “the hardest working orchestra in America,” and for good reason: on average, we put in roughly 30% more hours than our peer orchestras. But not only is it more hours, those hours are non-linear. By that I mean that in a symphonic schedule, you typically proceed linearly week to week with one program at a time: a Beethoven overture, a Brahms concerto, and a Tchaikovsky symphony, for example; that’s about one opera’s worth of material, and that’s all you really need to worry about for that week. By contrast, at the Met we’re doing 7 performances of 4 different operas in any given week, on top of which we are rehearsing 2-3 different operas to be opening in the coming weeks, in addition to which I’m personally preparing another 1-2 operas that are about to commence rehearsal. All told, it is not unusual to be dealing with 8-9 different operas in any given week. And no one week is like the next; the repertoire and the schedule is constantly churning and changing, and research has shown that a lack of consistency and habit amplifies fatigue. That all puts an insane stress on one’s mental faculties. A symphonic program is hard enough — that’s a lot of material to keep razor sharp on your “front burners.” But four years ago, I quickly realized that even a single week at the Met was going to require more “front burners” for my brain: 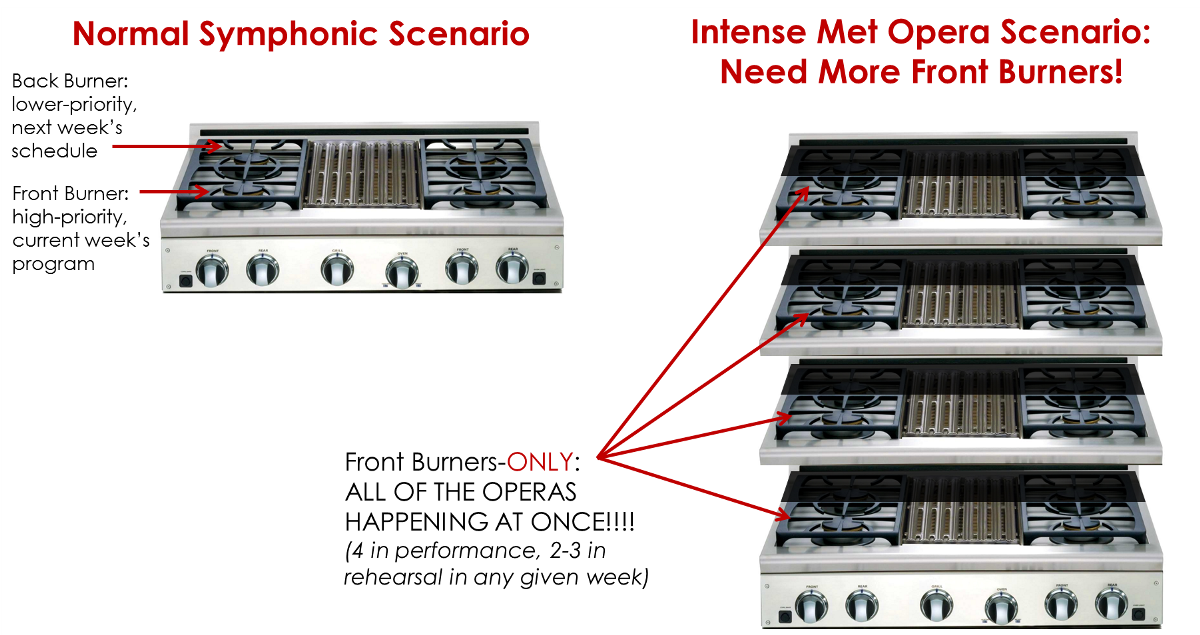 Now to be absolutely clear, this is not me whining: I love my job. It’s an honor, and a privilege, and I wouldn’t rather be doing anything else. But that kind of schedule imposes a new reality on your life — one to which you must smartly adapt if you want to keep performing at the highest level possible night after night.

So in April of 2013, 5 months before my first rehearsal, I was staring down the barrel of all of this and I thought, “Whoa…this is gonna require an extraordinary amount of time and planning. I need a new way to learn this stuff, different from the way I’ve been learning my symphonic programs. I must learn a massive amount of opera repertoire from scratch, quickly, and so thoroughly that I can still nail it when I’m utterly exhausted. When it’s Act III of Die Meistersinger and I’ve already been playing for 5 hours and I’m struggling to stay focused, I’ll need the right instincts to kick in so as to avoid derailing the entire show.”

For me, “starting at the Met” began many months ahead of time. I developed a process for learning each new opera that took about 9 days each. (For those doing the math at home, yes, that’s 15 new operas multiplied by 9 days each = 135 days…or roughly 4 ½  months of straight-up repertoire-learning homework.) I start by approaching it like an opera patron — reading the synopsis, and then experiencing a performance. As I wrote previously, in order for me to do justice to the dramatic potential of operatic timpani, I need to know the story. And I need to know the story at a level of detail where I can correlate musical moments to the drama onstage. So I sit down with a DVD-ripped .m4v file and just soak it in. As I’m watching and listening, I take only minimal notes (relating to any particularly notable timpani action). At this point, I’m still going for the big picture.

Next, I begin indexing my digital score. By this I mean that I have a PDF of the score, and I go through the various acts, numbers, arias, and scenes, and then digitally mark them up with time-stamps in relation to my reference recording. (I usually have 3-5 recordings to study and compare, but I’ll denote one of them as the “reference.”) With the time-stamps in place, I can now quickly jump around between spots in my digital score and digital video file. I then transfer those same time-stamps directly into the timpani part. (This saves a ton of navigation time later on in the process.)

Then it’s time for the measure-by-measure study. Starting with the overture/prelude, and continuing all the way to the end of the final act, I go measure by measure listening to the music, following along in the score, and marking up the timpani part as necessary. This is by far the most time consuming part of the process, because the markups include at a minimum: cues, dynamic attenuations, phrasing ideas, articulations, note lengths, roll style/speed/articulation, timings, drum tuning scheme and pedaling options, mallet choices, and pitch changes. (In a future post, I’ll discuss how the written pitches in timpani parts in most Italian opera are suspect, and often need to be “fixed.”)

Finally, it’s time for the on-the-drums practicing. While going measure-by-measure, I will have noted passages that are technically challenging, and I prioritize those for specific excerpt-like practicing. But perhaps the most important part of the “on-the-drums” time relates to the concept of fatigue noted above: when you’re starting to lose focus, it’s incredibly easy to miscount, or to forget where you are in the music. My mantra became “I want to know my entrances well enough that I don’t have to be counting rests.” And so that’s what I did — I put on my headphones, went to the time-stamps 30-45 seconds before each timpani entrance, and played along with the reference recording over, and over, and over again, burning it into my muscle memory and my mind’s ear. By the end of my preparation process, I will have engrained all of my cues so thoroughly that even when utterly exhausted and half-conscious, I can still nail the entrances because I’m operating on instinct and unconscious execution. (Incidentally, this has saved me a number of times! Nobody’s perfect, but this method of preparation has definitely improved my stats from where I would have been otherwise.)

And it’s a good thing I invested in that process, because those first few months of season 1 hit me like a Mack truck. It seemed like no amount of sleep would get me to feeling “rested.” There was a near-perpetual fog of mental fatigue, and the physical toll was equally intense: arms, neck, back, and shoulders rebelled under the conditions of so much playing. (I had to adapt my regimen of yoga and massage accordingly.) But it was a joyful kind of intensity — an astonishing feeling of experiencing new “personal best of” heights of artistic excellence on an almost nightly basis. Or of hearing yourself playing on the radio, and being like “wow…cool.” It was the feeling of being crammed so full of new music and new experiences…but still somehow wanting more.

So what was it like for me starting at the Met? Basically, I felt like Homer Simpson:

[Note: due to a quirk of facebook-comments-related upgrades, the following comments were unable to display properly; including a screenshot as a workaround]: